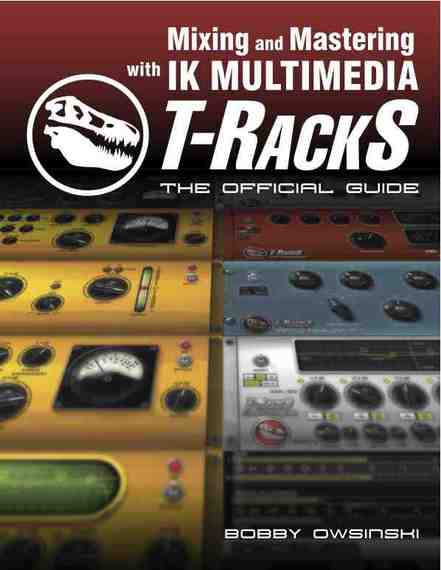 • An easy to understand overview of the T-RackS modules

• How to mix using T-RackS

• How to master using T-RackS

• Mixing tips used by the pros

• Mastering tips used by the pros

• How different mastering signal paths can change the sound

Read An Excerpt
BUY THIS BOOK

IK Multimedia’s T-RackS is a popular stand-alone audio mastering software application that includes a suite of powerful analog-modeled and digital dynamics and EQ processor modules that also work perfectly as plug-ins during mixing. While T-RackS is an extremely powerful tool for improving the quality of your recordings, all of that power won’t do you much good if it’s misused.

With Mixing and Mastering with IK Multimedia T-RackS: The Official Guide, you can learn how to harness the potential of T-RackS and learn the tips and tricks of using T-Racks processor modules to help bring your mixes to life, then master them so they’re competitive with any major label release.

If you are an instructor that uses Mixing and Mastering with IK Multimedia T-RackS in one of your courses, a free Instructor’s Resource Kit is available, complete with lesson plans, tests and Powerpoint/Keynote presentations. Please send an email request along with your school and department to be sent the download link.

Congratulations on creating a book that describes the mixing and mastering process in straight terms. I have tried numerous tutorials/courses etc with no success. Your book was the cure. 10/10!
Jerome

If I did not have T-Racks I would still give this book a perfect score. There is great, concise, easily readable and well-organized value here.
Andrew H.

About T-RackS 3
The Technology

Make A Copy Of The Session

Set Up Compressors And Limiters

Turn Off The Internet

Play Something You Know

Tips For Choosing A Set Of Monitors

How Loud (Or Soft) Should I Listen?

Compression As An Effect

What Are You Trying To Do?

A Description Of The Audio Spectrum

Using The Spectrum Analyzer During Mixing

When To Use It

At The End Of The Mix

At The Beginning Of The Mix

Chapter 6 – Preparation For Mastering
How Long Should It Take To Complete A Mix?

When Is A Mix Finished?

Mixing In The Box

Mixing With Mastering In Mind

How Much Should A Mix Cost?

Chapter 7 – An Introduction To Mastering
Why Master Anyway?

The Different Between You And A Pro

Setting Up T-RackS 3 For Mastering

Setting Up The Project Parameters

What To Do With Out Of Phase Material

How To Use The Spectrum Analyzer

How To Get Hot Levels

Mastering For The Internet

Setup Prep
This is the “housecleaning” stage where you get everything in the session nice and tidy before you actually commit to the actual process of mixing. The idea is to make everything easy to locate during the mix.

Make A Copy
As before, it’s best to make a copy of the session that’s designated as the “mix” (“songtitle mix”) so it’s easy to see and locate at a later time, and also keeps your previous session safe if you ever have to go back to it.

Delete Empty Tracks
Empty, unused tracks take up space in your edit and mix windows and aren’t doing anything useful. It’s OK to have empty tracks that you’re saving for an instrument when you track or overdub, but if you’ve gotten this far without using them, you don’t need them now. Eliminate them.

Deactivate And Hide Unused Tracks
If there are tracks that are copies or ones that you know you won’t be using, deactivate them and hide them so they don’t get in the way. Just hiding them isn’t enough in that they’ll still soak up system resources that might be needed later, especially if you use a lot of plug-ins. Make sure you deactivate them.

Arrange The Track Order
Although the track order isn’t critical, it will help you move the mix along faster if like instruments are grouped together. This means all the guitars are next to each other, drums and percussion next to one another, and the vocals are together.

Color-Code The Tracks
If your DAW app allows it, color-coding your tracks also makes things a bit easier to find. This means that all the drums would be one color, guitars another, the vocals another and so on.

Insert Section Markers
Section markers are one of the big time savers in any DAW. Insert a marker just before each new section (usually a bar or two before works well) as well as any other points in the song that you might want to quickly find during mixing, like drum fills, accents or even the half-way point in a section.

Label The Tracks
Many workstations automatically assign a name to new tracks that have just been recorded, but they hardly ever relate to track. So you don’t mistake one track for another and adjust the parameters of the wrong track during the mix, clearly label all the tracks. If the track’s name currently is something like “gt012”, label it something easy to read like “guitar” or “gtr.” You’ll be happy you did later.

Set Up Groups
Groups are often overlooked but they’re extremely useful during mixing for a number of reasons (see figure 1.4). First of all, groups allow you to separate elements of the mix in order to make the mix easier to adjust later. Secondly, many times it’s a lot easier and better sounding to compress or put an effect on an entire group rather than each individual instrument (although sometimes both works pretty well).

By setting the groups up ahead of time and assigning the particular channels to them, your mix will be both faster and smoother.

Set Up Effects
Most mixers have a standard effects starting point for mixing. One that I’ve seen that works well even for tracking and overdubs is:

For drums – a reverb using a dark room set to about 1.5 seconds of decay with a pre-delay of 20 milliseconds

For all other instruments – a plate with about 1.8 seconds of decay and a pre-delay of 20 milliseconds

For Vocals – a delay of about 220 milliseconds

It’s amazing how well these settings work without any tweaking, but to make everything fit better, you can time the delay and pre-delays to the song, but keep the parameter close to the settings above. For instance, if the only delay in the 220 ms region is a 232 ms quarter-note-triplet, that’s the one to use. The decay is set so that a snare drum hit just about fades out by the time the next one comes around.

Another common setup is two reverbs and two delays, set like:

Short Reverb – a room program with the decay set from .5 to 1.5 seconds of decay with a short pre-delay timed to the track

Long Reverb – a plate or hall program with a decay set from 1.5 to 4 seconds of decay and a pre-delay of as little as 0 or as much as 150ms timed to the track (depends on your taste and what’s right for the song)

Of course, this is only a starting point. You might find your own particular starting point uses a lot more effects, or you may prefer to add effects as the need arises during the mix. Regardless, if you have at least some effects set up before you start the mix, you won’t have to break your concentration to set them up later.

Assign The Channels – There are some tracks that you know ahead of time will be assigned to a certain effect (like the drums or snare to a short reverb) so you might as well set that up now as well. Don’t forget the panning.

Set Up Compressors And Limiters
Once again, there are some channels that you pretty much know ahead of time that will need a compressor inserted like the kick, snare, bass and vocal. Best to insert it into the signal chain of the channel now, but leave it bypassed until you decide you need it.

if you’re a proponent of mixing from the beginning with a stereo buss limiter, now’s the time to insert that as well. We’ll cover stereo buss compression by itself in chapter 5.

Setting the Compressor
Because the timing of the attack and release is so important, here are a few steps to help set the compressor up. Assuming that you have some kind of constant tempo in the song, you can use the snare drum to set up the attack and release parameters. This method also works for other instruments in the same manner.

1. Start with the slowest attack and fastest release settings on the compressor.

2. Turn the attack faster until the instrument (in this case, the snare) begins to dull. Stop at that point.

3. Adjust the release time so that after the snare hit,the volume goes back to 90–100 percent normal by the next snare beat.

4. Add the rest of the mix back in and listen. Make slight adjustments to the attack and release times as needed.

The idea is to make the compressor breathe in time with the song.

Vintage Tube Model 670
The Vintage Tube Model 670 compressor sound good on just about anything you want to use it on (see figure 3.1). It provides an intangible “glue” to the track even if the gain reduction meter is hardly registering. That being said, try it on vocals, bass or any kind of guitar using 5 or 6 dB of gain reduction and a Time Constant set on 1. It won’t sound too compressed yet the result will be consistent and solid. Keep the Threshold controls low (2 or 3) when you want the compression to sound pretty transparent. Set it high (anything over 5) when you really want it noticeable.

The 670 sounds great on a drum submix. You may only need a few dB (or a lot more), but it will pull the sound together, cover the inconsistencies, and bring the kit right up in your face. Depending upon the pulse of the song, you might want to try different Time Constant selections, with #5 or #6 usually working well. Another interesting feature is the Lat/Vert mode, which compresses the outside of the stereo soundfield instead of the center. You can get some interesting sounds this way, and carve out a section of your mix so other instruments can sit better.

Starting Settings For The Vintage 670

Increase the Left and Right Time Constant controls to  adjust the attack and release times.